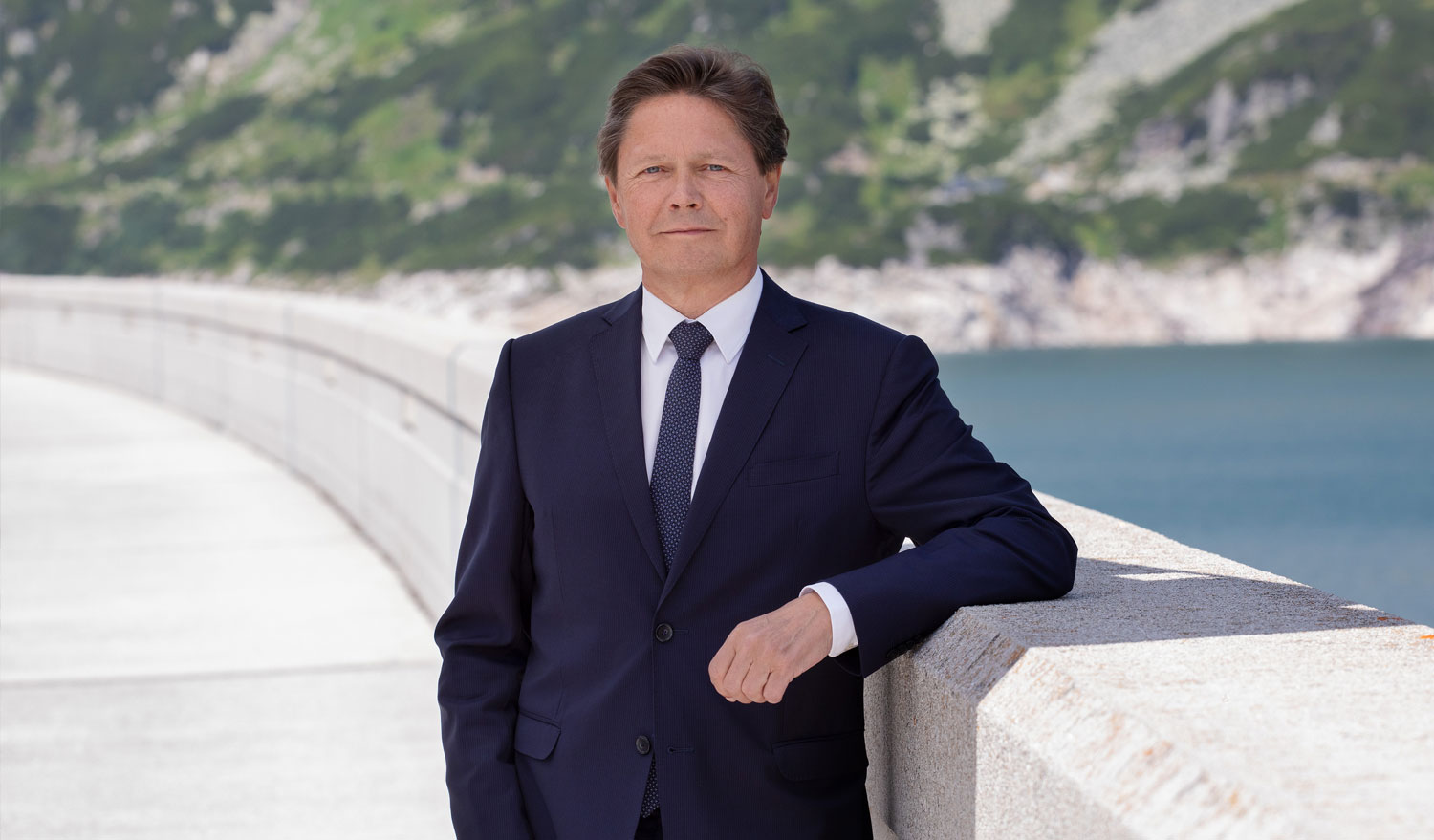 Posted at 13:14h in interview by admin 0 Comments
0 Likes

PRISMA REPORTS: Verbund is Austria’s leading electricity company, one of the largest producers of electricity from hydropower in Europe, with 128 hydropower plants and an capacity of 8,200 MW. The company is active in the generation, transmission, trading and sales of electricity. Can you give me a general overview of Verbund? How does the company contribute to Austria’s energy system, grid security, the stability of supplies, and the current transformation of the sector?

WOLFGANG ANZENGRUBER: Verbund is a state-owned company, owned 51% by the Republic of Austria, and employing roughly 2,800 people. We operate mostly is Austria, but also in Germany. Verbund is concentrated very strongly on hydro-generation: we are operating more than 100 hydropower plants in Austria, and roughly 20 power plants in Bavarian Germany. We are active in onshore wind generation, with a portfolio of a little more than 400 MW of installed capacity, located 50% in Romania on the Black Sea coast, 25% in Germany, and 25% in Austria. About 95% of our electricity generation last year was renewable and CO2-free. That represents a total output of 30 terawatt-hours, and covers about 40% of the electricity demand in Austria. Verbund is also the operator and owner of Austria’s high-voltage transmission grid. Austria sits between Western and Eastern Europe, and therefore this transmission grid operation is quite important since it connects us to other countries, from Germany to Switzerland, Italy, Slovenia, Hungary, Czechia and Slovakia. On the downstream side, Verbund trades in Austria and in Europe,. Also, on the private customer side, our market is roughly 8 % and appx. 20% on the industrial side.

PRISMA REPORTS: The Austrian Government has set the bar very high in regards to sustainability, and aims to have 100% renewable electricity by 2030, to reduce greenhouse gas emissions by 34%, and decarbonify the entire energy system by 2050. How is Verbund helping the country achieve these goals?

WOLFGANG ANZENGRUBER: The Republic of Austria has ambitious targets for the next ten years, including the objective to cover 100% of its electricity needs out of green generation by 2030. At the moment roughly 70% are covered by CO2-free technologies; 30% are based on fossil generation, mainly from gas generation and imports. In the future, about one third of the additional demand should be covered by hydro – both by constructing new plants, but also by increasing the efficiency of existing plants. The rest should be covered by photovoltaic and wind power. At present, Verbund produce 95% of its electricity CO2-free. The next step for us will be to close our last remaining coal-fired power plant within one year – then VERBUND will bebe out of coal generation.

Aside from increasing the generation, Verbund is also working on enhancing energy efficiency in all aspects of society, and on better cooperating with other industrial sectors proposing an integrated approach. As a state company we are supporting the strategy of the government in its various goals. For example, we are quite active in the field of e-mobility: SMATRICS, a joint-venture company of VERBUND, OMV & Siemens, builds and operates charging stations across Austria, with a maximum distance of 60 km so you can really travel through Austria by e-car. Furthermore SMATRICS offers managed infrastructure services as a charge point operator for various other companies.

VERBUND isalso active on the issue of industrial heating, as well as on the issue of green hydrogen. We regard green hydrogen as the missing link in our total decarbonization objective. We are now conducting a first big pilot project with voestalpine and Siemens to produce green hydrogen out of green electricity, and to substitute fossil fuels in the steel-making process. We are working on all kinds of pilot projects as we expect hydrogen to play a big role in the future. Last but not least we offer various energy solutions like demand response, demand-side management and energy management to our private and business customers.

Our joint goal must be to fight climate change and to reduce CO2 emissions. That’s the target. If we do not succeed in this field, the adaption costs will be huge. We’ll have a huge economic problem, on top of the environmental crisis, and so we have to deploy all efforts and support these activities to achieve these targets. Yet as a company, we need to ensure that our efforts are also profitable.

PRISMA REPORTS: How is Verbund accelerating its digitalization efforts to increase energy efficiency and to deploy smarter energy models?

WOLFGANG ANZENGRUBER: On the demand response side, we have introduced virtual power pools, the demand-response solution to optimize energy generation and consumption for our industrial customers.. In order to balance the system – namely match generation with demand – we need to enhance our storage capacities : We are quite strong in pump storage hydropower, which is the most efficient storage possibility thanks to our mountenous topography that is rich in water. and with an efficiency of roughly 80%. A second option for storing power are batteries, that will also have a significant role in the future. And, as mentioned, we are doing research in hydrogen, also for use as energy storage.

Our private customers, we offer a combination of PV, e-mobility solutions, charging stations, as well as services to manage demand in their homes. We are driving a lot of development in the field of energy distribution.Take energy communities, that share a small scale energy system: Neighbour A produces electricity with his photovoltaics solutionswhen he is on vacations he can give or sell it to Neighbour B. A lot of digitalization is required to arrange and manage this smaller distribution of electricity. We rely a lot on smart metering as it enables us to have online knowledge about the demand, and it is easier to balance this at a lower voltage level rather than balancing everything on the high-voltage grid. We do both. The electricity system of the past was created in one direction – from generation to demand (from energy supplier to consumer). Now it goes two-ways: the consumer functions also as a producer (“prosumer”). We can benefit from more management, from digitalization on the demand side and the generation side. This is an important thing to improve the prognosis. Hydrogeneration is very strongly dependent on water flow. You have to have the right prognosis of hydro flow in the coming days to balance the system.

PRISMA REPORTS: Austria is a country that has a lot of economic and sustainability champions. To what extent are Austria and Verbund working to transmit knowledge and expertise in terms of renewable and sustainable energy management?

WOLFGANG ANZENGRUBER:Verbund has a good and long experience on hydro power – we have been active in hydro power for more than 70 years – ans we also offer our knowledge and expertise to other countries, eg in the area of hydroconsulting.. Aside from that we are really supporting the hydrogen issue in Europe. We are part of Eurelectric, the European Electricity Association, and are bringing our experience on the table..

PRISMA REPORTS: To what extent are you accelerating your partnerships or discussions and collaborations with other industry peers globally?

WOLFGANG ANZENGRUBER: Without the contribution of the industry, Austria would never achieve our climate targets. VERBUND has a number of cooperations in place with the steel-making industry in Austria. We cooperate with voestalpine, not only on the hydrogen side but also on the demand response side and the renewable generation side. We have a joint research and development process. We also cooperate with OMV, tha Austrian oil and gas company, on the e-mobility sector: Emission-free mobility will play a key role in the futureand green hydrogen can be a solution for heavy transport. This connection and cooperation with customers and industries is very important for our future development.

PRISMA REPORTS: In general, do you think Austria is doing enough as an ambassador for the rest of the world, to share its sustainability efforts and to serve as an example?

WOLFGANG ANZENGRUBER: There is a good collaboration between politics and industry in Austria, and in this field it’s important to have a joint approach if we want to achieveour goals. What we need is to enhance our collaboration with other countries: they have a lot of experience and we can all benefit from each other.

PRISMA REPORTS: This year will mark your tenth year as the head of Verbund. Reflecting on this anniversary, what have been your biggest achievements, and the trademarks you have left ?

WOLFGANG ANZENGRUBER: Ten years ago, Verbund was a conglomerate of many branches. We managed to streamline the company, to have a clear strategy as well as mission statement: We exited from thermal generation which wasn’t easy, but we were clever to do it in the early stage. The company today is in good condition. We are well-established and cashflow-strong. We are now in a situation where we are a low-cost producer of renewable energy. We have good profitability and we are ready to grow, as weexpectenergy prices to remain stable for thenear future. Innovation and digitalization drive us to grow our portfolio for the future. We see a growing demand for electricity from renewable sources. The growing renewable electrification of the world should be made hand in hand with fossil fuels. They have to work together, and not fight against each other, but in collaboration.

PRISMA REPORTS: How do you see the future of the energy system and where do you see Verbund in the next five to ten years?

WOLFGANG ANZENGRUBER: Our directions for the future are clearly set. Austria’s #mission 2030 targets are ambitious, soi s the timeline, but what matters is that we start to implement our roadmap and to do the right things now. If we achieve it one or two years later, that is not the main issue. Hydro will remain our main focus, but we will increasingly work on PV generation and onshore wind, which are growing and important fields. Furthermore, we want to enlarge our portfolio with hydrogen as a future energy source.. We have the power and the base to achieve that.

Our target is to achieve profitable growth through significant innovation in our products and processes. Innovation will be key in the coming years to balance the demand side with the investments we need, and that will be the main challenge in the future.

PRISMA REPORTS: To conclude this interview, what’s your final message?

WOLFGANG ANZENGRUBER: VERBUND is perfectly equipped to offer the solutions needed for our energy future. As a company, we will not favour an isolated approach, but seek European and global cooperations. We are ready to exchange experience in our field, to give help and support, but we are also very interested in getting input from others. Economic sectors in the future will become more interconnected, the role of economic actors will change, and this transformation process is only beginning. We have to change our mindsets, and we have to work together – not only with other countries but also with other sectors. We also have to forge a good relationship with policymakers who give us the surrounding base, and we have to concentrate on market-based issues – not so much on regulatory issues. It should be the most efficient way to embrace the future.